Bittersweet Melody - A Conversation Between Funkos 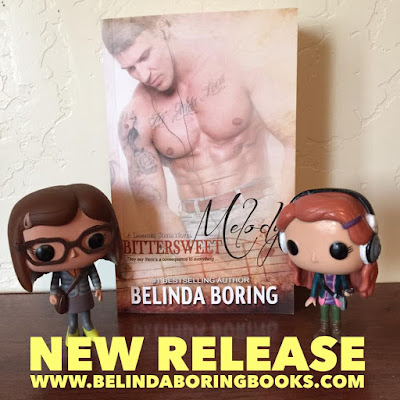 I was minding my own business this morning and overheard a conversation between two of my Funkos ...

Amy Farrah Fowler:
Have you read Bittersweet Melody yet?

Amy Farrah Fowler:
Mine too! He's hard for resist. Sheldon would tell us its all in our heads, though. That it's scientifically impossible.

Charlie Bradbury:
*shrugs* Pfft. Sam and Dean would probably douse us with holy water, thinking we were possessed, but who cares! Cooper Hensley is a GOD amongst MEN!

Amy Farrah Fowler:
I can't wait to tell my girlfriends all about him.

Charlie Bradbury:
We need to tell the WORLD. This book will save readers everywhere from boredom and lack of swoon. Hell, I'm pretty sure if Dick Roman had read it, it would've cured him of his badassery. Cooper would've crushed him with his awesomeness.

That's when they spotted me peeking through the door crack and agreed to pose for a photo with "their" Cooper. <<< looks like they've claimed him!

Have you met Cooper Hensley yet? One-clicked Bittersweet Melody? You know you want to now you've seen Charlie and Amy have given him their STAMP OF APPROVAL! *snickers* Go ahead ... resistance is futile. If you're still not sure, I'm sure we could figure out some scientific equation to show the logic in the purchase but hey .... it would hurt my brain! Enjoy!

(Thanks for playing along and enabling my dorkiness! hahaha)
Email ThisBlogThis!Share to TwitterShare to FacebookShare to Pinterest